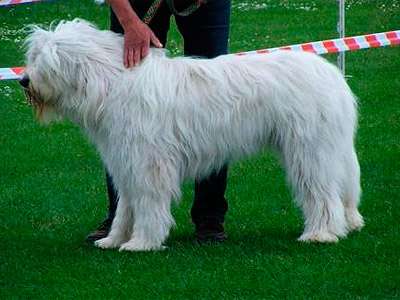 The South Russian Sheepdog, also known as the Ukrainian Ovcharka or the South Russian Ovcharka, is a large, long-haired Russian sheepdog. Weighing about 110 to 115 pounds and growing to a height of about 23 to 25 inches, this dog has a fairly elongated head with a broad forehead, a big nose, and oval-shaped eyes. Its white teeth are big and fit closely. The belly is moderately tucked up while the back is straight and strong. Its loin is short, broad and rounded.

The front legs are straight and relatively long while the hind legs are powerful and set wide apart. The tail, which reaches the hock, falls at rest and curves upwards toward the end. Its coarse, thick, and water resistant coat measures about five to seven inches long. Although the coat is usually white, shades of grey, white and yellow, and white marked with grey can also be found.

It is unclear whether the South Russian Sheepdog is a Russian native or was developed from a variety of European herding dogs that were used to take large flocks of sheep from Spain to Russia. This dog was used to protect sheep from bears, wolves, and livestock thieves.

During the Civil War and the Communist Revolution in Russia, the main breeding kennels in Crimea and Ukraine were completely destroyed. The Red Army took control of the breed, keeping it away from the public eye until the early 1980s. This dog was officially reconsised by the American Kennel Club in the late 1990s.

The South Russian Sheepdog is an amazing guardian and problem solver that can manage a large flock of sheep, goats, or cattle on its own for days. It tends to be willful and independent, explaining why it requires a strong-minded and authoritative human to be its leader. Although this dog gets along well with kids, it hates being ruffed up or intimidated. It is also suspicious of strangers, but does not react aggressively toward them.

The South Russian Sheepdog is a generally healthy breed and has no major health concerns. However, it is susceptible to common dog health problems such as elbow dysplasia, gastric torsion, obesity, and canine hip dysplasia. To ensure that the dog is safe and not facing any health risks, try your best to take it to your veterinarian for regular check-ups and vaccinations.

To help the dog grow up to be a well behaved and easy-to-control adult, be sure to train and socialise it from an early age. Training should be based on a relationship of mutual respect, letting the dog know that you are the boss without domineering.

Apart from training and socialisation, this dog also needs plenty of exercise to stay in shape and be more productive. Whenever it is not working as a livestock guardian, take it for long walks or keep it occupied with an interesting game such as Frisbee or tennis.

Due to its large size, the South Russian Sheepdog requires a spacious but safely enclosed area where it can run and play freely, meaning that it should never be kept in an apartment. It should be left to spend most of its time outdoors, doing what it is best at such as guarding the gate and rounding up livestock. It also needs plenty of water and a healthy diet to maintain high energy levels.

The South Russian Sheepdog's long, dense, and coarse coat requires an ongoing attention. It should be brushed thoroughly on a daily basis to get rid of tangles and dust particles. The teeth should also be brushed to prevent gum disease.