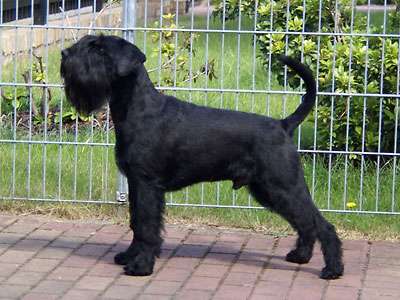 If you are looking for a lapdog, then the Schnauzer is definitely not it. This breed thrives on constant and varied activity and its natural boisterousness can be quite exhausting if left untamed. Also, along with the aristocratic appearance provided by that uniquely bearded and moustached muzzle goes a superior intelligence and attitude that refuses to be subservient to anyone who has not proven themselves the worthy victor of a challenge. Those who are considering ownership of this breed will quickly need to establish their alpha male status, but if this is done successfully, then the reward will be a totally loyal and devoted companion and a fierce protector.

Schnauzers are notoriously territorial and their natural instinct is to be suspicious of any newcomers. They possess a deep bark that belies their size, which for a male is generally between 18 and 20 inches and a female between 17 and 19 inches high at the shoulder. With firm and consistent training, however, they will accept the alpha dog’s welcome of visitors and then happily demand from them all of the attention that they feel their bloodline deserves.

A Schnauzer does not enjoy sharing their space or their family’s attention with other pets unless these have been introduced to them at a very early age. They do, however, seem to tolerate cats, perhaps because they are more docile and do not need to be taken for walks, or need to participate in other forms of attention-grabbing games. Schnauzers behave like puppies up until the age of about 3 years and, just like any child, their preferred method of being attended to is by energetic play.

It is not for nothing that the Schnauzer is known as ‘The dog with a human brain’, and, particularly as a puppy, its response to not getting what it wants will be frustration and a look that speaks as clearly as a child’s usual enquiry, ‘…but why?’ This breed’s need for regular exercise cannot be overemphasised, but its over-exuberance can sometimes lead to unintentional nips, so that constant reinforcement in training is necessary. As with children, they respond best to a system that rewards them for good behaviour.

Schnauzers do not shed much hair, so that little will be found on the furniture inside of a home, which is where they should ideally be allowed to live, as they are easily able to jump a 6-ft wall and could escape the confines of the average garden. However, brushing is essential, particularly of the beard and moustache to avoid tangles. For the same reason, it is also wise to wipe their faces after each meal.

A Schnauzer’s need for discipline extends to its feeding, and this should comprise of 1 to 2 cups of high quality food divided into 2 mealtimes. Allowances can be made for the levels of energy expended by individual dogs daily.

Schnauzers are a generally healthy and robust breed with no inherent frailties, but should still undergo annual eye checks, as well as X-rays to determine any hip dysplasia. Breeders will always furnish certificates from the relevant regulatory authorities confirming that both of the dog's parents were free of any related conditions.

Schnauzers adapt to any environment whether their home is in an apartment or on a country estate, as long as their seemingly endless supply of energy is able to be expended: Unused energy is destructive energy. Vigorous half-hour walks 3 times a day combined with some ball games should keep your Schnauzer bonded, happy and content.