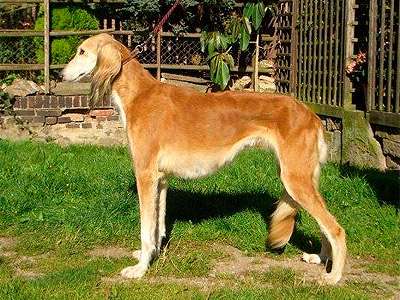 This sleek dog is instantly recognisable by its unusual gait. When the Saluki runs at top speed all four of its legs are in the air, which creates a striking profile.

The Saluki is also known as the Gazelle Hound, Persian Greyhound or Arabian Hound and comes from the area that extends from Turkey to eastern Turkestan. This majestic breed is closely related to the Afghan Hound and was one of the royal dogs of Egypt, valued for its regal profile and grace. In fact, the dog was so prized in Egypt that their bodies were often mummified alongside the Pharaohs when they died so that the dog could enter the afterlife with its master. This is one of the first dogs to have ever been domesticated and the breed was named after the former Middle Eastern city of Saluki. Salukis were considered by the Muslims to be a sacred gift from Allah and were given as tributes rather than being sold. The Arabs used the Saluki to hut animals such as gazelle, antelopes and jackal and this has also been a successful racing dog for many years. The breed was recognised by the American Kennel Club in 1929.

This slim breed resembles a Greyhound and features a long and narrow head that is supported on a long, graceful neck and it rather wide between the ears and tapers towards a black or liver coloured nose ending in a slight stop. The Saluki’s has a level bite as well as oval eyes that are either dark brown or hazel. The long ears hang close to the head, while the chest is narrow and deep. The feet are set at the ends of strong, straight legs and are thickly haired between the toes, while the tail is long and carried low. The Saluki has a short coat that features long and silky feathering on the tail and ears, while the coat can be various colours including white, cream, golden, fawn, black and tan or a combination of colours.

This gentle breed is very friendly and devoted. Although it can be rather aloof at times, the Saluki usually becomes very attached to one person and is good with children. When training the Saluki it is important to remember that the breed is very sensitive and will not respond if treated harshly.

The breed is prone to certain genetic eye diseases as well as cancer. The Saluki’s long, sleek nose is prone to sunburn.

The Saluki prefers warm temperatures and should always sleep indoors to prevent becoming chilled, although it is not suitable for apartment life. the large dog is inactive indoors and needs plenty of space to manoeuvre.

This breed loves to run, so it is important that it is given plenty of time to run in a yard on another large outdoor space every day. However, the Saluki has a tendency to chase small animals when not watched closely and its fast running speed mean that it can be difficult to catch. The dog will hunt on sight and should not be let off the lead unless in a very isolated area where there are no other animals around. The Saluki has an odour-free coat that is easy to brush and comb, while the ears should be checked regularly.