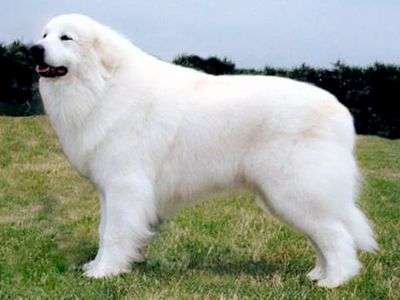 The Pyrenean Mountain Dog is one of the largest and most spectacular breeds, famous for its luxuriant coat and its natural instinct as a guard dog. It is thought this imposing dog originated in Asia, and was brought to the mountainous region of the Pyrenees during the 16th century, where is was used to guard sheep. Gradually, as its popularity grew, it began to be kept as a household pet, especially by the upper classes. In modern times, the PMD has been used for rescue work, as a sled dog, and even for carrying message during wartime. Nowadays, it can still be used as a working dog, which is why it is included in the Pastoral class, but is also commonly found as a pet or show dog.

The PMD is unmistakeable, with its massive size, lush furry coat and majestic appearance.The dog stands between 69 and 81cms (27-32 inches), and the bitch at 63-74cms (25-29 inches), although some dogs have been known to reach over 1m tall. It is also a heavy breed, with the average weight for a dog 45kg (100lbs), and the bitch 38kg (85lbs). It has a broad chest that extends below elbow height, together with strong muscular shoulders and powerful hindquarters. Its rounded head and strong muzzle combine with its small ears and dark eyes to give an impression of alertness and intelligence. It tapered tail should have a gentle curl and be well coated with hair to make a beautiful plume. The PMD is an agile dog, as the breed needs to be sure-footed and speedy when herding in the mountains, so it should demonstrate a relaxed yet purposeful gait.

Like many Pastoral breeds, the PMD has a double-layered waterproof coat that provides excellent insulation during cold weather, consisting of a coarse outer layer with a layer of finer dense hair underneath. Dogs have a longer mane around the neck and shoulders, but bitches are likely to have a smoother coat and a less developed mane. Many people think that the PMD has a white coat, but in fact patches of grey, blue, orange and tan are acceptable in the show ring.

The PMD has a placid temperament, and is known for being intensely loyal, caring and affectionate, as well as intelligent and easy to train. It is considered especially good with children and has a strong sense of protection, due to its heritage as a guard dog.

As the PMD is a large breed, owners should consider carefully the commitment required to caring for their dog well. It will need plenty of food, although it's important not to overfeed, and this breed can also be prone to barking and drooling. Surprisingly, the PMD does not require huge amounts of exercise; an hour a day is considered sufficient.

It is essential that the PMDs coat is groomed regularly and thoroughly so that it stays free of knots and tangles. The PMD sheds all year, but sheds particularly heavily once a year. Some owners like to clip or shave the coat to avoid problems with tangling and also to help the dog feel more comfortable in hot weather, although it's important to protect the skin from sunburn if this is done.

It is a mandatory requirement for Kennel Club Assured Breeders to undertake testing under the BVA/KC Hip Dysplasia Scheme, and responsible breeders should ensure puppies are tested. The PMD can also develop bloat, bone cancer and luxated patellas. Skin conditions can also be an issue in warm weather.