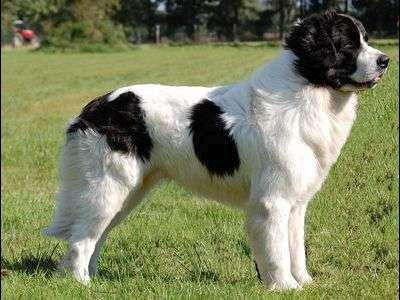 The Landseer E.C.T (European Continental Type) is affectionate, agile, and fast and is a distinct breed, not to be confused with the Newfoundland variety.

Interestingly, this breed was named after the English artist, Sir Edwin Henry Landseer; for several of the paintings he created, the most famous of which is “A Distinguished Member of the Humane Society”, has this breed of dog in it. Moreover, this 1838 painting also attests to the previous existence of the breed in England and not just brought into the country in the late 19th century, as some believe.

The Landseer is an excellent swimmer; but it was also observed that these dogs were adept at saving drowning people and, therefore, were very popular among European fishermen. By the end of the 19th century, this breed was barely distinguishable; however, despite the failed attempts to breed them prior to World War I, they emerged as a recognizable separate breed in 1945 and by 1960 were registered by the FCI, further enhancing their popularity.

This is a mastiff breed, and while it is easy to confuse the Landseer ECT with the Newfoundland, the differences become obvious when you observe them closely. The percentage of black in a Newfoundland’s coat is considerably more.

These are active creatures, loyal, intelligent and self-assured; they are gentle with children and members of the family, and try to come between the people they love if they perceive a threat. However, they are not so gentle with other dogs, unless they are exposed to different breeds within the first year of their life.

This huge swimmer and rescuer is a heavy shedder and its oily double coat is ideally suited for its role in rescuing drowning people. As per the breed standard, the Landseer should create an image of height, power and good balance.

They have firm straight backs and well-muscled shoulders and hind legs. The coat is predominantly white with black patches on the head, rump and croup; however, the muzzle has a symmetrical white blaze that extends to the collar and also, the fore chest, legs, belly and tail should as a rule be white. They have medium-sized ears and dark brown eyes with what is often referred to as ‘a noble expression;’ and while they have a broad head, it is not quite as massive as the St. Bernard’s.

The Landseer male stands between 70-82 cm and a female 67-72 cm when measured at the shoulders. Weighing about 500-750 grams at birth, they grow rapidly during the first year. By the time the pups are a year old, they weigh between 50-60 kg. In order to prevent obesity, they need to be exercised judiciously.

As already mentioned, the Landseer is basically a rescuer; so, don’t be surprised if it tries to rescue you the first time you take it swimming. It needs a bit of basic training in order to distinguish between a person swimming for pleasure and a swimmer in distress. One other area that also requires discipline is when the male Landseer attempts to dominate other dogs.

Since its coat is also long and wavy, frequent brushing is required to remove the grime, mats and tangles; furthermore, besides invigorating the skin, brushing also spreads the oil in its coat and keeps it fresh and shining.

All you need to do is give a Landseer plenty of love and a bit of your time to gain a loyal friend for life.