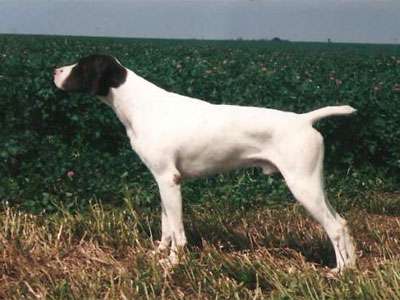 The German short-haired pointer (GSP) is a versatile all-purpose dog breed that is proficient with numerous types of games and sports such as retrieving, trailing, and hunting. It has a streamlined body and long, strong legs that give it the ability to move and turn quickly. Its muzzle is long and broad, allowing it to retrieve even heavy game. Its high-set ears are hanging loose on the opposite sides of the head. The medium-sized, almond-shaped eyes are dark brown in colour. The short, tough coat has a dense undercoat that keeps it warm in cold weather. Coat colour can be dark brown, black, black and white, or liver and white.

While the origin of the German short-haired pointer is not very clear, this breed is believed to be a descendant of different types of German scent hounds, hunting, and trailing dogs such as the German bird dog, foxhound, and the old Spanish pointer. It is also likely that various German tracking dogs as well as the Arkwright pointer and the English pointer contributed to the development of this breed. This dog was officially recognised by the American Kennel Club (AKC) in the year 1930.

Created to be a versatile hunter and a good family companion, the German short-haired pointer is intelligent, clever, curious, and bold. It is also affectionate, loyal to its master, and fond of its family. It likes and mixes well with both adults and children, explaining why it is considered a good family pet.

Without adequate training and socialisation, the German short-haired pointer can exhibit shyness, aggression, fearfulness, and lack of cooperation. So, be sure to train and socialise it properly from a tender age. To be successful in training the dog, you have to exercise leadership effectively by displaying a natural air of authority and providing firm but calm and consistent commands that it can follow. If you do not have any experience in dog training, it is advisable to hire the services of a professional dog trainer within your locality.

Due to its active and energetic nature, the German short-haired pointer can become high-strung, frustrated, restless, and destructive if not given ample daily exercise. It loves nothing more than engaging in constructive activities such as running, walking, jogging, hiking, and hunting. It also loves games such as football and Frisbee, meaning that it is best suited for active families.

Although the German short-haired pointer is a healthy breed, it is prone to conditions such as epilepsy, gastric torsion, hermaphrodism, hip dysplasia, mast cell tumours, lymphedema, and Von Willebrand's disease. Not all German short-haired pointers are vulnerable to any or all of these diseases, but it is advisable to be aware of them if you are considering this breed.

Although the German short-haired pointer is physically able to live outside in mild weather, it does best when allowed to live in a large house with access to a yard. It also loves water and can swim exceptionally well if given a chance to do so, meaning that you can do it a great favour by adding a dog pool in your compound.

Due to the dog's high level of activity, it requires a considerable amount of water to quench thirst and prevent dehydration. You should also provide it with a healthy diet to prevent obesity.

The German short-haired pointer's grooming needs are minimal, just occasional brushing to keep the coat neat and get rid of dead hair. You should also trim the nails and examine the ears on a regular basis.