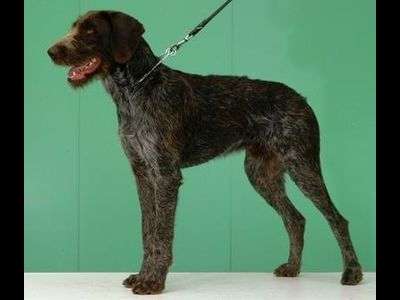 The German rough-haired pointing dog is a medium size gun dog, distinctive in its appearance with its bristly coat, bushy eyebrows, and moderate beard. Sometimes referred to as a German wire-haired pointer, or a Deutsch Stichelhaar, they are an intelligent breed, even-tempered and highly energetic. Life expectancy for this breed is between 12 to 14 years, and when bred they can produce up to ten puppies.

Although there are a couple of theories about the exact origin of the breed, they were a creation for the time. Appearing in Germany in the late nineteenth century, their all round skills for hunting were ideal. The end of the feudal system in Germany had meant more land was available for the people, and this was soon followed by the rise of a hunting loving middle class. The conditions were ripe for a versatile hunting dog that people could rely on. The German rough-haired pointing dog fit the bill perfectly, as it was more then a pointer, being able to also track and retrieve game from water, forest and land.
The breed gained official recognition in its country of origin back in the 1920's, and was eventually recognised by the American Kennel Club in 1959.

The German rough-haired pointer stands at between 58 to 70 centimetres, weighing around 25 kilograms. The breed can be brown and white, dark brown, and black and white, its distinctive, wiry coat being up 5 centimetres in length. This thick coat helps it withstand cold, harsh conditions, and is slightly longer on the shoulders and belly area. Its beard and eyebrows help in protecting against the likes of thistles when hunting.
In temperament the breed is calm, balanced and of a friendly nature. Though they can be aggressive towards strangers, they can get along with other dogs, but will tend to want to be the pack leader. A brave dog, they will tend to only look to their master for commands, with whom they can form a strong bond. Yet with training from an early age they make a good family dog, becoming devoted to family members and seeking lots of attention.

This breed is full of life, a dog bred for hunting that needs lots of exercise. It loves open spaces to be able to run around in, and this obviously needs taking in to consideration before taking one in as a pet. A small living area without a large garden for the dog to let off steam is not ideal, and could lead to behavioural issues. Bear in mind also that it has a liking for water, and is liable to take any opportunity for a dip when out exercising.
The German rough-haired pointing dog is an intelligent breed, and quick to learn. As a hunting dog their instincts are largely acquired by two months old, and being such active dogs by nature they like to work. When training they respond best to stimulation and treats, but the owner will need to be firm and consistent.
In terms of grooming, the very nature of its coat will suggest that they require a reasonable level of grooming. A regular brushing with a stiff brush is good, though its coat repels water and dirt well, so bathing does not need to be such a regular job.