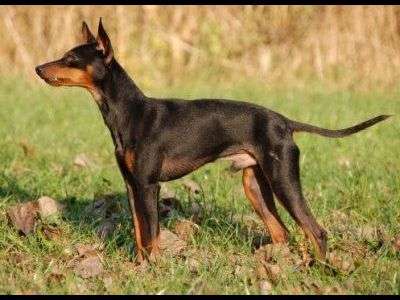 The English Toy Terrier is closely related to the slightly bigger Manchester Terrier as well as the Old English Black and Tan Terrier, which is believed to be its direct ancestor. Up until the 1960s, this charming little dog was known in the United Kingdom under the name "Miniature Black and Tan Terrier". Its history stretches back to the 16th century when it was developed as a small and easy to carry companion for hunters who trained it to flush out game birds and foxes. Its extraordinary hunting skills made it also being used to get rid of vermin like rats and mice. The English Toy Terrier held on to its popularity throughout the 19th century when it was known as one of the best „ratters“ in Great Britain, having to kill rats as a betting sport. In 1848 a specimen named „Tiny“ because it only weighed just over two kilos, was recorded to have killed over three hundred rats in just an hour. The growing demand for miniature dogs in the early 20th century led to a lot of interbreeding which caused various genetic diseases and made the English Toy Terrier a generally very unhealthy dog. It only survived thanks to the efforts of some British breeders who gradually made this dog strong and healthy and therefore demanded again. Today the English Toy Terrier is known to be a very robust and sleek breed that is popular not only in the UK, but also in mainland Europe, the United States and parts of Asia.

The English Toy Terier is a small dog of a graceful, elegant and well-proportioned build with long and slender limbs. It reaches a shoulder height of up to thirty centimetres and weighs up to four kilos, the males and females being the same size and weight. Its short and smooth coat is only permitted in a shiny black colour with the typical, clearly seperated tan-coloured markings on the chest, the legs, on the mussle and above the eyes. The English Toy Terrier’s most distintive features are its long, pointy head and the erect, long and triangular ears.

The English Toy Terrier is an inquisitive, friendly and very alert dog that can show quite a lively and energetic character. It is affectionate and absolutely devoted to its family. Its personality is very typical of a Terrier; courageous, with a strong will and an independent mind. It is playful and therefore a suitable companion for children. Its fragile frame makes it quite sensitive to rough handling though, which means little children need to be taught how to play with it appropriately. It enjoys regular petting as well as being entertained with ball games and other activities. As it is very alert and hears extremely well, it shows a distinct talent for guarding the house.

The English Toy Terrier is suitable as a family dog as well as a loyal and highly adaptable companion for young and elderly people alike. It can be kept in a small city apartment, because it doesn’t need much exercise apart from the daily walk in the park. As it enjoys the close company of its owners, it shouldn’t be left alone for long hours, as it can develop seperation anxiety. This can lead to destructive behaviour and other unexpected issues. Its short coat doesn’t need much attention at all. If bathed, the fur should be treated with gentle products as the English Toy Terrier is prone to sensitive skin and a variaty of skin problems.
If kept in a family with children or with other pets it needs to be socialized from an early age. As it can be quite stubborn and has a mind of its own, training should be consistent but also loving and gentle.