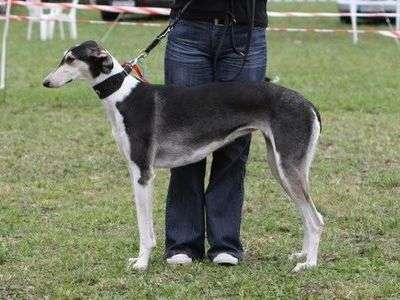 The Polish Greyhound or Chart Polski (pronounced ‘Hart’, not ‘Chart’) breed is native to Poland and the breed of choice for Polish nobility. This sighthound is similar to English Greyhounds, but completely unrelated and thought to have originated from Asian sighthounds, instead. During World War II, most of Polish noblemen were forced to abandon their Chart Polski dogs, who became strays. As it was a time of devastating hardship, the dogs were taken in by the lower classes and used to hunt game to feed the countless starving families. When the Communist Party came to rule, the breed fell into disrepute and became rare by the ‘70s. A Dr. Mroczowski wrote a magazine article appealing to people to save this breed, part of Polish heritage, and the Szmurlo family, in particular, made great efforts to sustain the breed. The first studbook was opened in 1981, and eight years later, the breed was fully recognised by the FCI.

The Polish Greyhound is not as soft-tempered as other hounds. A very devoted dog, the Chart Polski will become one with the family. They are affectionate dogs and will enjoy rough play, which is why younger family members should be careful, considering the sheer size of the dogs.
They are suspicious towards strangers and they are extremely territorial. Very protective animals, they make excellent guard dogs. Developed for hunting, they are exceptionally aggressive towards other animals, including dogs. This may be because they were known to hunt not only small animals, but wolves, as well. No more than one other dog of opposite sex should be kept in close company.
Most Polish Greyhound are individualists when it comes to training, and some are quite stubborn. They take a good deal of time and effort to train thoroughly. When hunting or chasing animals, it’s virtually impossible to determine it to return to its master, and it will not rest until the prey is killed. They should, therefore, be kept in tall, large, enclosed areas and on a lead whenever outside.

A hunting dog that outruns its prey with great agility, force and speed, the Chart Polski is large, lean, slender and light. The average male reaches 27.5 to 31.5 inches in height at the shoulder, and an average female stands about 2 inches shorter. There is some variation in size, though. Weight is a factor of gender, height and build, but most weigh 50 to 75 pounds. The ribs can be clearly visible, giving the impression of a neglected dog. The tail is relatively long, with a heavily curved tip, sometimes fully coiled. The tail usually hangs down when at rest, but is brought level with the body when in motion.
Much like other sighthounds, its head and face are narrow, with a muzzle equal or greater in length to the skull. The muzzle tapers off, but the nose is blunt. The lips are well-defined, but they never droop. The nose is always large and dark, but the ears can be folded back, rose, tipped or erect. The eyes are almond-shaped, oblique and large. The colour can range from black to amber, but darker is preferable.
The Chart Polski’s coat is short, but much longer than the English Greyhound’s. It should be springy, but not wiry, shorter on the legs and torso and slightly longer on the rest of the body. Any colour is allowed, and the most common are: solid white, black and tan, tri-colour, and brindle.

The Polish Greyhound will live 12 to 15 years with adequate care and it will produce a litter of four to eight puppies. Studies have yet to be made concerning the genetic makeup of this breed, so definitive connections can’t be made between certain diseases and the breed. As the breed was developed for hunting, natural selection has impeded certain traits from carrying forward, so owners usually report an excellent constitution for their dogs, some of which live up to 15 years in good health. This is a low-maintenance breed, with only occasional brushing necessary to ensure adequate grooming.