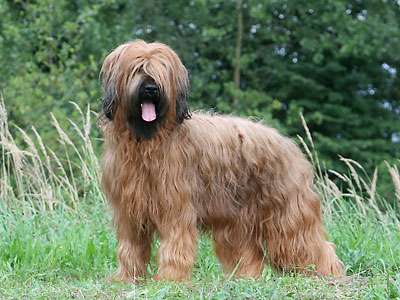 The Briard was defined in 1863 by Pierre Megnin and this breed became popular in the same year when it was presented in the Paris dog show. It is believed that the Briard was named after the French province of Prie, despite the fact that the breed does not originate from that region of France. The Briard was accepted into the first shepherd dog club in 1897 and this breed has been owned by a number of famous figures throughout history, including Napoleon, Lafayette and Thomas Jefferson. This breed was originally used to defend property against poachers, while the French army used the Briard for tracking, carrying ammunition and food to the frontlines, detecting mines and running messages. The Briard was recognised by the American Kennel Club in 1928 and is still used as both a herder and a flock guardian. Among their other skills are guarding, military work, search and rescue and police work.

The Briard is a large and powerful herding dog and the bodies of males tends to be the same length as height, although females have a slightly longer body. The large head is long and rectangular, while the wide muzzle features a long beard and moustache. The stop is well marked, while the black nose is square and features open nostrils. The large, widely set eyes are either dark brown or black and feature dark pigmentation on the rims, while the eyes are also covered with long hair. The ears are set high, while the powerful legs are supported by large feet that are compact and round. This breed features a double coat with an outer course coat and a fine and tight undercoat. The coat colour can be almost any colour and variation except for white and black, grey and tawny are particularly common among Briards.

This active breed loves herding and has a kind and protective instinct. The Briard loves to play and is obedient, although it definitely has a mind of its own, meaning that it can be wilful and difficult if proper training is not done from an early age. Despite its large size, Briards tend to be sensitive and should not be treated harshly.

Although this breed is generally healthy, it can be prone to cataracts, PRA and hip dysplasia. Like most other large chested breeds, Briards can experience stomach torsion and bloat. This condition can develop very quickly and be fatal if left untreated, so it is important to monitor the breed’s diet carefully.

This breed is moderately active indoors and can adapt to living in an apartment as long as there is a garden for it to run around in as well. Although Briards love to spend time outside, they are happiest when spending time as part of a family.

This working dog requires a long work each day and plenty of room to run around in at other times, otherwise it can become restless and develop certain types of behavioural problems. This breed loves to swim and makes a great jogging companion. The coarse and strong coat tends to repel water and dirt, meaning that it does not need to be bathed regularly. However, the Briard’s coat should be groomed for a few minutes every day to prevent it from becoming matted. The insides of Briard’s ears also need to be checked and cleaned from time to time.