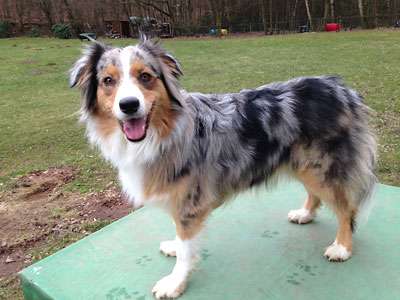 Despite its name, the Australian Shepherd originates from the USA, where it was a hardworking companion to cowboys and ranchers in the American West. Today it makes a great family pet as it is an intelligent, affectionate and lively dog that is very easy to train. Bred to be a working dog, the Aussie loves to be kept busy and needs lots of long walks and challenging tasks and games and in return will give great loyalty and devotion to its owners.

The origins of the Australian Shepherd are not completely traceable, but it is believed that they originally came from Spain and were brought to the USA by Basque shepherds who had travelled to Australia to work, taking their dogs with them. When Australia exported many flocks of Merino sheep to the USA, the Basque shepherds and their dogs went too. In the American West they became an invaluable working dog, assisting on ranches with the huge herds of cattle and sheep, and they became very popular at rodeos and in TV and film Westerns. The breed was recognised by the American Kennel Club in 1993.

Australian Shepherds are medium-sized, muscular dogs, standing between 18-23 inches tall and weighing between 50 to 65 pounds. They have a medium-length double coat, which often has a distinctive marbled merle effect. Not all Aussies have merle coats and they can be black, red, blue merle or red merle, with or without white or copper point markings. Aussies with a predominantly white coat have a genetic predisposition to blindness and deafness; white Aussies usually result from mating two merle Australian Shepherds. The head is flat or slightly rounded with a moderate stop and the muzzle is tapering and equal to the length of the skull. The eyes are almond-shaped and can be brown, blue or amber; many dogs having eyes that are two different colours and eyes with marbling and flecks as well as solid colours. The ears are triangular with a slightly rounded tip and set high at the side of the head. The Aussie has strong jaws with a scissor bite and tails that can be long or bobbed.

Australian Shepherds are herding dogs that were bred to work hard, meaning that owners need to keep them occupied to prevent behavioral problems. They are extremely intelligent and very easy to train, making them ideal at performing obedience and agility tasks and they make good assistance, detection or search and rescue dogs. They love anything that makes them feel useful, such as performing tasks and chores around the home, and ideally need several long walks every day. Australian Shepherds love human company and are very affectionate but can be wary of strangers. It is important to socialise them from an early age to get them used to dealing with new people and situations. The Aussie’s coat needs to be kept well-brushed to remove dead hair, especially during their twice-yearly shedding period.

The Australian Shepherd can develop hip dysplasia and may suffer from genetic eye problems such as cataracts, colobamas, detached retinas and Collie Eye Anomaly. It is advisable to have regular eye-screening with a veterinary ophthalmologist throughout the dog’s life to check for problems and for parent dogs to be certified as free from eye diseases. Another problem that can occur is Multiple Drug Sensitivity, for which puppies and their parents can be tested with a simple cheek swab.