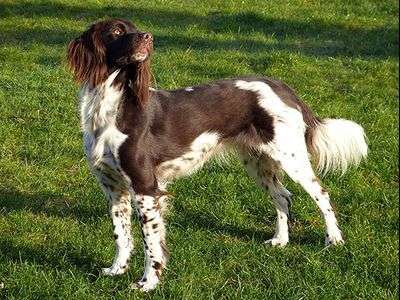 A relative newcomer to places other than Germany, the Kleiner Münsterländer, or Small Münsterländer, has been bred in its homeland since the 14th Century. Primarily used as a retriever in falconry, the Kleiner Münsterländer's use was slowly branched out into other areas of small animal hunting. The breed exploded in popularity throughout Germany after 1919, when the class system was abolished and hunting became a popular pastime, where it had previously been seen as a strictly noble activity. This also led to the breed being fine-tuned, to maximise their attributed for hunting on both land and water. The Small Münsterländer is one not related to the Großer Münsterländer, in anything other than name. Throughout the years, the breed has been developed to be an all-round hunting dog, but these little dogs are still relatively rare outside of Germany.

Kleiner Münsterländer are extremely intelligent and patient dogs, and they are easily trainable. However, due to their high intelligence, these dogs require consistence and kind and gentle, yet firm handling to get the best out of them. These little dogs have a strong prey drive, which is desirable in a hunting dog, but makes them somewhat unsuitable around smaller animals. They are social little dogs and due to this and their intelligence, leaving them alone can incite boredom and lead to problems. Kleiner Münsterländer need to be regularly socialised with people, which makes them unsuitable for living in kennels, but they thrive when integrated into a family home, as they have excellent temperaments and are perfectly suitable for families with children.

Kleiner Münsterländers will usually bond to one person, typically the person who takes them hunting, but they are not generally possessive little dogs and enjoy attention from groups of people. Like most retrievers, these little dogs will often try to bring you a "retrieve", even at home; usually benign objects like cushions or slippers though, thankfully! They generally just need owners who will give them a lot of love.

The Kleiner Münsterländer's coat is short and easy to keep, with only a quick daily brushing required and any washing and detangling of the feathers as needed.

Kleiner Münsterländers are very intelligent and easy to train. However, they do require a consistent, firm routine in order to shine. They are the type of dog where mutual respect is key and they will not respond well to domineering or force. In hunting, it is important that training is started as early as possible, with getting them used to the lay of the land, gunfire and simple commands such as "stay" and "sit". With sympathetic training, these little dogs can easily combine the tasks of a retriever, tracker and pointer, and they have great endurance, even in the harshest climates. Training sessions should be kept short and interesting, to capitalise on the Kleiner Münsterländer's high intelligence. These dogs live for hunting; so much so that many breeders will only place their dogs within a hunting home, as they feel it is a shame for the dogs to lose out on an activity they love so much.